Week 4, Matt Ryan got me 22.  Reggie Bush got me 22.  The Colts got me 22.  NO ONE ELSE DID ANYTHING.  I mean, okay, Blair Walsh nabbed me 11, & Bilal Powell in my flex pulled in 10.  But beyond that, NO ONE ELSE DID ANYTHING.  That tiny Keebler Elf Ray Rice went ahead & drew me a single point.  To be fair, though, I blame this entirely on Joe Flacco (who, I realized, has a face that looks like a foot).  You don’t even need to know who else played… the rest of my team netted 10 total points, is the point.

It helps that my opponent started Andrew Luck, who ended up bringing in 18 points.  Why it didn’t cross my mind to draft  Luck, I’m not really sure.  Going by my “pick players I knew from the NCAA” rule, Luck should’ve jumped to the front of my list, right?  He didn’t only because I had a total ambivalence about him when he played for Stanford.  I just can’t get myself to root for the “superstars” in NCAA football… maybe stemming from the fact that I’ve never known a high school/college football standout who’s been a tolerable human being.  (If you know any, point them my way.  Prove me wrong.)

Anyway, then Week 5 happened.  I played against Peyton Manning… all 36 points of him.  And all 17 points of Jamaal Charles…. & all 10 of DeMarco Murray.  Thankfully no one else on my opponent’s team showed up.  (The Broncos even nabbed him -3 points.)  No one on my team really had a standout performance–no 20-something scorers–but they worked together well to push me just over the win mark.  My sweet little Keebler Elf made up for his previous 1 point with 19 this week, but sadly, Reggie (better known as my boyfriend) only nabbed me 6. 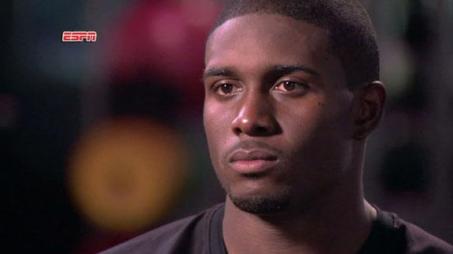 I know, Reggie. It’s hard being good at everything.

It took me up until Week 5 to really figure out how to work the waiver wire to my advantage–largely due to the fact that I was in bye week hell.  Here’s my waiver strategy:  pick up anyone who’s doing anything against the Jaguars.  For Week 5, I picked up the Rams because they played ‘em, & they ended up with 13 points–the very thing that put me over the edge.

I also made my first trade in Week 5, giving away Chris Johnson in exchange for Vernon Davis.  This’ll be the first week I play Davis, so we’ll see how that pans out.  Also this week, though, I made a move that initially makes no sense to anyone to whom I mention it: picking up Jay Cutler as my starting QB.  My thought process was initially “Eh, he’s hot.”  But then I watched a special about athletes & their wives.  This is when I realized that Jay Cutler is kind of creepy–asking Kristin Cavallari’s agent to hook them up, then asking her to marry him (for the first time) after two months.  When she hesitated on marrying him, he just knocked her up.  Like… oh, okay. 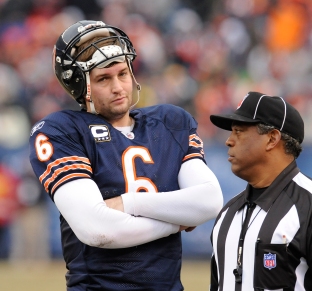 So needless to say, my desire to pick up Jay Cutler was less about wanting to bone him (I mean, I’m not saying I wouldn’t… I’d just have to be prepared for the fact that his perpetually sad face has nothing to do with my inevitably awesome performance), & more about needing a starting QB who was projected to get more than Matthew Stafford’s 10.  (Matt Ryan’s on a bye week.)  As soon as I saw that Cutler was playing the Giants, I clicked that “claim” button like my life depended on it.  It’s worked out pretty well–he ended up netting me 20 on Thursday night.  I’m curious to see how the rest of my team works out–including my newly acquired Saints D.  My opponent’s got Tony Romo, so I’m really hoping he bombs this week.  Will this happen?  No.  But he’s projected to nab 25, so as long as he doesn’t exceed that, I still have hope.

What do you think?  Should I keep Jay Cutler around?  He plays the Redskins next week, which has to look good, for him/me right?  How’s he stand up to Matthew Stafford & Matt Ryan?  Would you keep all 3 QBs on your roster?  Do you need to look at this picture for awhile before you decide?