& Then There Were Eight 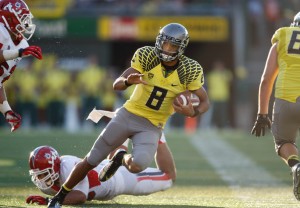 Eight FBS teams are undefeated. Here are predictions for their games this week.

Alabama does not play this week. They will still be undefeated after this weekend.

Their best win is either a ten point one on the road against Kansas State, or a 71-7 take down of Iowa State. Or a 73-42 win over West Virginia? Is anyone impressed by any of those?

Anyway, Baylor does not play this week either. Next Thursday, they host Oklahoma, then Texas Tech, before road games at OK State & TCU. Baylor will still be undefeated after this weekend, but they should slip up at some point.

Jameis Winston leading the Seminoles to an undefeated start reminds me a lot of Alice Munro winning the Nobel Prize. No one picked Munro to win this year & it was a big shock when she did. Florida State shouldn’t be this good with a freshman quarterback & a history of living down to expectations, but here they are. After dismantling Clemson, I can’t bet against them this week, even going against another undefeated team.

Fresno should easily handle Nevada this week. How good is Fresno? It took OT against Rutgers & a postponed Colorado game for them to get here. Derek Carr is a good quarterback, but without much of a defense, Fresno could lose a game at some point. I don’t think it will be to Nevada.

The dream season ends here. Miami has barely survived scares against North Carolina & Wake Forest. Their marquee win was 21-16 over Florida. Florida State is too good to lose this week.

I’m a big fan of Jordan Lynch (& hopefully get a chance to see NIU against Toledo or in the MAC title game). The Huskies aren’t losing to a 1-7 UMass team, though I’d keep an eye on their game against Ball State on the 13th (more on this game later).

Ohio State should beat Purdue. They should run the tables going into the Michigan game. Still, a team going undefeated in back-to-back seasons? That’s a hard thing to do, something even Alabama hasn’t managed in their recent run.

Ohio State beats Purdue. They head into the Illinois game 9-0.

Oregon does not play this week. They will still be undefeated after this weekend.

Justin Carter is the co-editor of Banango Street & an MFA candidate in Poetry @ Bowling Green State University. He enjoys the Rockets & Texans. He sometimes enjoys the Astros. His poems appear in Hobart, Red Lightbulbs, & Revolution House.
View all posts by juscart →

This entry was posted on November 1, 2013 by juscart and tagged alabama, baylor, bcs, carter, oregon, undefeated.