REVIEW: I purchased a copy of Tom McAllister’s memoir Bury Me in My Jersey at AWP in Boston earlier this year*, but only I read it recently, perhaps to celebrate the beginning of football season. I’m not a big “memoir person”, and I say this because some people are big “memoir-people”. They love to read extremely personal accounts of someone else’s life. The more popular memoirs I can think of focus on tragedies: The Year of Magical Thinking, A Heartbreaking Work of Staggering Genius, or Angela’s Ashes. McAllister’s memoir also revolves around a singular tragedy: the untimely death of his father. But the memoir itself isn’t singular at all. The book is extremely multi-leveled: it details historical facts about a football team I was predisposed at birth to also love; the struggles of becoming, earning respect as, and respecting yourself as a writer; retellings of memorable NFL games/moments; and—perhaps most surprisingly for a book billed as a sports memoir—a happily-ever-after romance. I’m the kind of person who would say something like, I don’t like memoirs. But I more-than-liked this one. I enjoyed reading it, I learned from it, and I could relate to it in numerous ways.

It’s hard to review Bury Me in My Jersey without wanting to tell, instead, all about my own build-ups and disappointments as an Eagles fan. McAllister begins the book in February 2005, the Eagles Superbowl against the Patriots, and catches up readers who haven’t memorized the few years of Eagles’ history before that fateful day. He then leaves readers hanging, before kickoff, saying “If you’re from Philly, you know the story already.” And we do. But we’re interested in how McAllister experiences the game so that we can then relate it to our own story, parallel our own heartbreak with his—similar to how most people know where they were when they learned that first tower had fallen in 2011** and are always ready to share that story.

McAllister weaves his adulthood perception with his rough and tumble childhood throughout the book. The memoir’s shifting chronology balances the story so that fans and not-fans both appreciate it. Adult Tom chastises Child and Teen Tom for his competitiveness and seemingly selfish decisions. Before camping outside Veteran’s Stadium, Teen Tom over-generously offers too many people Eagles’ playoff tickets, including his father, and Adult Tom muses on how much this may have hurt his father. Readers know that Adult Tom is a full-blown Eagles fan because of an early discussion on his obsession with the EMB (the Eagles message board) and a list of “Confessions” made in Chapter 2, where a number of later story lines trace back.

Where does fandom come from? How come one week a child barely notices football, and the next, he’s researching as many statistics as he can find about a the team whose name bears the same as his hometown? What turns someone from not knowing (or caring) what a “down” is, to wanting to know why the refs blow the whistle and stop the play for an offensive false start but not for a defensive offsides? McAllister’s ability to use his story to explain where his Eagles fandom may stem from is the closest I’ve come to understanding my own obsession, and provides great insight to fandom itself in general.

Readers get a detailed and personalized account of some of the most memorable moments in recent Eagles history (I don’t know how I forgot we used to sign TO’s name to soccer’s “olé” chant), as well as McAllister’s own notes from homework he did on the farther-back history of the team when he first found himself truly caring about them. It was because of his book that last Sunday when my Dad said, “For who! For what!” and laughed happily after a dropped pass by one of the Giants’ WRs, I knew exactly what he was referring to.

But McAllister’s book also works for readers who might not be Eagles fans, as a coming-of-age story set (mostly) in Philadelphia, that just happens to climax during Donovan McNabb and Andy Reid’s heyday. Readers also appreciate the honest account of a complex relationship between father and son, and how football, a mess of men in tight pants running into each other in the best televised live-action chess game there is, affected and colored that relationship– colored it green, of course.

It’s not*** in one’s blood to be predisposed to root for or like a certain sports team over the other. It’s a conscious choice. My Dad jokingly refers to the fact that my brother and I both like the Eagles as Good Parenting, but there’s something in his comment that makes sense. As I don’t have any children, I can’t imagine how difficult it is to relate to them. The Eagles, for McAllister and his family, helped him get on better with with his seemingly badass older brother and patient, rational father. I am sure that being an Eagles fan was something about him that his Dad was proud to have instilled in him, even with all the recklessness and heartbreak the passion for the team comes with. Good parenting, indeed. 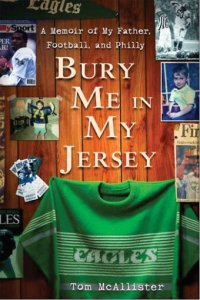 When I moved back to Philadelphia, I remember thinking, When I lived in Boston and went to Emerson, the Patriots won the Superbowl, and when I lived in New York and went to NYU, the Giants won the Superbowl. All I need to do is get into a PhD program located in Philly, and the Eagles will have it in the bag. McAllister says, at some point in the memoir, that all the Eagles fans he knows wants nothing more than to see the Eagles will it all in their lifetime. He never makes the direct connection to his father, who was alive when the Eagles won the AFL-NFL World Championship game and through two Eagles’ Superbowl losses, but when he says it, the reader thinks of it– for Tom, for Tom’s father, for herself, and for all of the Eagles fans she knows, haunted by every season that amps us up for potential victory, only to crush us in the end.

The epilogue of the book gives the rest of the dreary scene of McAllister’s Superbowl XXXIX. The whole book I’m waiting for it, and when it comes, I’m re-crushed from the trauma of the loss, wallowing in my own memory of the game as expected. There’s so much more to life than those hours that ended in howling misery, I think, trying to justify something that can’t be justified. Even if we have a post-season to be proud of someday, there’s something that comes with being an Eagles fan, a predisposition to expect the worst– it seeps into you, that makes you ready for the worst while hoping for the best, which is, in fact, a really good way to live. McAllister’s memoir accurately communicates this and accomplishes more than a typical memoir usually does.

RECOMMENDATION: Read this book during football season, whether you’re an Eagles fan or not.

*I did this when I stopped by the Barrelhouse table to say hello to the “Barrelhouse dudes” as I call them.  I had heard it was hard to get a copy of, but then had seen one at Penn Book Center when I was broke. When I saw McAllister sitting in front of the copies on the table, I said I would be right back with my money. His inscription to me reads, “Ignore all the parts where I’m an asshole.” Full disclosure: Tom lives near Philly, I live in Philly, we’re both writers, and a lot of the time, we go to the same readings.

**Am I relating the Eagles’ only Superbowl experience in my lifetime to 9/11? I plead the fifth.

*** I say I bleed green, and I mean it when I say it. But there was a close call in about fourth grade when I could have become a Dallas Cowboys fan. I didn’t understand why they couldn’t be my second favorite team if the Eagles were my first favorite. Eventually, due to good parenting, I figured it out and came out on the right side of things.

Kimberly is the founder and editor in chief of Gigantic Sequins. She has a chapbook EVERY SONG BY PATSY CLINE (dancing girl press, 2014) and a website: kimberlyannsouthwick.com
View all posts by kimannjosouth →

One comment on “Book Review :: Tom McAllister’s BURY ME IN MY JERSEY (Villard Books, 2010)”